Representatives Joe Schmick and Eileen Cody have introduced a bill that would prohibit the Department of Health from giving a Certificate of Need (CN) for a purchase, sale, or lease of a hospital to any entity that already owns a hospital in Washington State.

Under the current CN law, this would only apply to true sales, purchases and leases of hospitals. This would be bad enough. Some hospitals may only have long-term viability if they are purchased by another hospital (e.g., the purchase of Auburn Medical Center by MultiCare). If they can’t sell to a Washington State-based hospital or system, the only choice for some endangered hospitals would be an out-of-state owner or closure.

The impact of the bill may be much worse than simply prohibiting a “purchase, sale, or lease.” The Department of Health is trying to use rulemaking to dramatically expand the definition of “sale, purchase, or lease” to include “any transaction in which the control, either directly or indirectly, of part or all of any existing hospital changes to a different person including, but not limited to, by contract, affiliation, corporate membership restructuring, or any other transaction.”

Although a Superior Court decision stopped them from doing so, the Department has appealed to the state Supreme Court. A hearing on that lawsuit will be held at the end of May. If the DOH is successful, CN review would be needed for any kind of partnership, including:

Combined, the DOH expanded definition and HB 1870 would mean that Washington State health care providers could only work with out-of-state companies to maintain or expand primary and specialty care in their communities or to do coordinated quality improvements. This doesn’t make any sense.

With health care growing more specialized and resource-intensive, and with technological investments being daunting, many rural and suburban hospitals are partnering with larger hospital systems to ensure that patients’ needs are being met.

Some of the partnerships that would be  forbidden under HB 1870 are:

If your hospital’s service area is represented by a Representative on the House Health Care and Wellness Committee, you should already have received am Action Alert  asking you to contact him or her in opposition to this bill. Please do this right away. (Cassie Sauer, 206/216-2538) 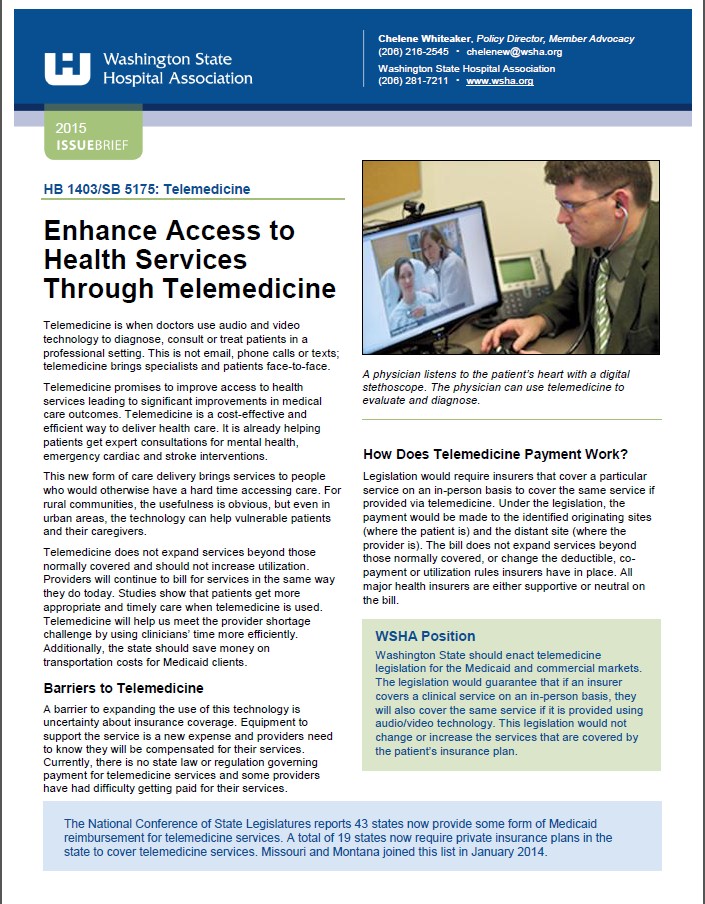 On Wednesday, we were thrilled when the telemedicine bill (SB 5175) passed the Senate – unanimously. It will now move to the House.

This is an incredibly important bill for us. One of the central values shared by WSHA and its members is the goal of increasing access to health care services. By clarifying payment issues, this bill will make it easier for hospitals to invest in telemedicine technology.

We are very appreciative of the partnership on this bill with the Washington State Medical Association and insurance companies. By working together, we were able to develop a bill that will improve access to telemedicine services within the structure of existing insurance plans.  (Chelene Whiteaker, 206/216-2545)

Some employment contracts require that after an employee stops working for the employer, the employee is restricted from competing with the employer for a certain time period and in a certain geographic area. Under Washington law, non-compete agreements that are reasonable in scope and duration are permissible if the clause is reasonably necessary to protect the business or good will of the employer.

There are three bills this session that would ban the use of some or all non-compete agreements in Washington State.

Last week, the House Health Care & Wellness Committee heard HB 1946. This bill, sponsored by Rep. Laurie Jinkins, would tax hospitals at 6 percent of revenue to fund a “Wellness Trust” which would be used to fund local public health departments and mental health services.

This tax would be levied on revenue less charity care and community benefit spending. WSHA is strongly opposed to a new tax on hospitals to fund government services for public and mental health. The bill fails to take into consideration the nearly $5 billion in cuts that hospitals are taking through the Affordable Care Act to finance the health coverage expansions.
While hospitals and health systems often work with their local public health departments in successful partnership, hospitals cannot be the funding source for public health activities or mental health services. (See the hearing on TVW. It starts at about 1:02.)

We asked hospitals who are represented by a Representative on the House Health Care Committee to contact him or her in opposition to this bill. We appreciate everyone who did contact their legislator. We are continuing to educate lawmakers on the effect of this bill. If you would like to talk to your lawmaker or hear more, please contact Andrew Busz (206/216-2533).

As we get closer to the cut-off date for bills to get moved out of their original committees, bills that have already been heard are getting moved into executive session or have passed the committee and are now waiting floor action.

Here’s an update on some of the bills we’ve been watching.  We’ll do a full roundup of bills next week, after the February 20 cut off.

Bills that have moved out of committee:

Bills still in their original committee:

Bills are moving fast! For the latest information, visit http://app.leg.wa.gov/billinfo/.

We are fast approaching the first cut-off of the session: Friday, February 20 is the cut off for policy bills being passed out of their committee of origin. (Cutoff calendar is here). As a result, there are fewer hearings on the schedule and more executive sessions.

WSHA staff or lobbyists will testify on the following bills:

SB 5880: Enacting the Washington human trafficking reporting act (Senate Law and Justice). We support this bill and are asking for an amendment to further define the hospital staff who are required to report suspected human trafficking.  We are also asking for an amendment to add immunity language for people reporting and testifying on suspected human trafficking and clarifying that reporting under the statute does not violate confidentiality privileges, such as doctor-patient confidentiality.  The immunity language we suggest is similar to existing statutes mandating reporting of child abuse and vulnerable adult abuse.  (Zosia Stanley, 206/216-2511)

HB 1067: Medicaid Fraud False Claims Act (House Appropriations). This substitute bill would remove the sunset provision from a significant portion of the Medicaid False Claims Act (FCA). The 2012 FCA contains a 2016 sunset provision and a requirement that the Joint Legislative Audit and Review Committee report on the effectiveness of the Act. This report is due later this year. Removing the sunset from the FCA would mean there would be no study or report on the effectiveness of the FCA. WSHA opposes removing the sunset and urges legislators to allow the study to be completed before any further steps are taken. (Zosia Stanley, 206/216-2511)

HB 1870: Prohibiting the sale, purchase or lease of a hospital to another Washington State hospital (House Health Care). See article above. (Cassie Sauer, 206/216-2538) 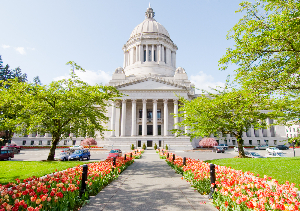 Thank you for last week!

We are very thankful for everyone who came down to testify! Your testimony is essential for helping legislators and the public to understand the real impact of proposed legislation. The following people testified last week: