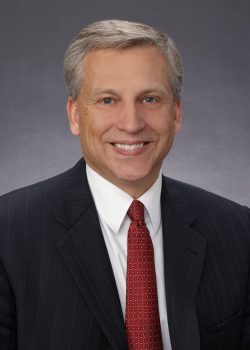 Seattle — The Washington State Hospital Association presented Eric Lewis, CEO of Olympic Medical Center in Port Angeles, with the Joe Hopkins Memorial Award during the association’s Annual Meeting on Oct. 12, 2017, at the Seattle Marriott Waterfront. The award recognizes Lewis’ leadership in his community and his strong advocacy for a better health care system for all Washington state residents.

“Eric Lewis exemplifies the best traits of our profession,” said Bob Malte, EvergreenHealth CEO and incoming WSHA Board Chair. “These are very tough financial times for many WSHA members, especially our rural members. In a health care environment that continues to be unpredictable, our awardee has managed to protect employees by reducing costs in other areas. He has maintained one of the lowest costs for services to patients in the state of Washington. This is a testament to both his financial acumen and his character. He deeply understands that the hospital is both a care provider and an economic anchor. He is a steward of both his institution and the community.”

To ensure his rural patients would be able to access more complex care in a seamless way, Lewis built a unique partnership with a larger health system to make it easier for patients to move back and forth. He then brought the system and the local physician community together so they could jointly train, recruit and retain primary care providers. His many investments in his workforce is one of the reasons why he was selected as this year’s Joe Hopkins Award winner.

“Eric is also a true champion of health care for all Washington communities,” Malte said. “While he’d be justified in staying in his community and solving his immediate problems, our awardee travels considerable distances to engage with WSHA, the Association of Washington Public Hospital Districts (AWPHD), the American Hospital Association and lawmakers. He looks beyond his hospital and his county, and he brings sincerity and decency to the work of building a better health care system.

Lewis has also served as an advocate at both the state and federal levels for adequate reimbursement for services, as well as appropriate legislation and regulations for rural health care. Olympic Medical Center received the Top 20 Rural Hospital Award this year from the National Rural Health Association, and it has been recognized by Consumer Reports for its low-cost structure. It has also been designated a Five-Star Hospital by Cleverley+Associates many times for stewardship and reinvestment into health care for the community.

In 2016, Lewis was named Clallam County Economic Development Council Olympic Leader and the American Hospital Association’s Grassroots Champion of Washington state. He currently serves as treasurer for the WSHA Board of Directors and vice president for the AWPHD Board of Directors, and his current affiliations include the Northwest Hospital Council, Rural Referral Center/Sole Community Hospital Coalition and the American Institute of Certified Public Accountants. He is also a board member of the Olympic Community of Health and a member of the Clallam County Economic Development Corporation (EDC) Board of Directors.

Olympic Medical Center is a rural Sole Community Hospital and is highly vulnerable to government policy changes and cuts in government reimbursement. More than 84 percent of the medical center’s patients are on Medicare, Medicaid or other government program, and more than a quarter of its patients are older than 65. Meanwhile, the medical center has maintained one of the lowest cost structures for hospital and clinical services to patients in the state.

More about the Joe Hopkins Award

The Joe Hopkins Memorial Award is given each October at the hospital association’s Annual Meeting, honoring the late Joe Hopkins, who was a long-time leader in the Washington state health care arena. The award is given to an individual who displays the spirit of his vision and dedication to Washington’s hospitals, with a special focus on rural health care. Read more about the Joe Hopkins Memorial Award on the WSHA website at http://www.wsha.org/our-members/awards/.